The 2012 Nobel Prize for Literature was announced today. Mo Yan received the honor.

From The New York Times: “Through a mixture of fantasy and reality, historical and social perspectives, Mo Yan has created a world reminiscent in its complexity of those in the writings of William Faulkner and Gabriel García Márquez, at the same time finding a departure point in old Chinese literature and in oral tradition,” the citation for the award declared, striking what seemed a careful balance after campaigns of vilification against other Chinese Nobel laureates.

While his American audience has been limited, a film based on his novel “Red Sorghum” and directed by Zhang Yimou, was one of the most internationally acclaimed Chinese films, seen by millions.

In addition to novels, Mo Yan has published short stories, essays on various topics, and “despite his social criticism is seen in his homeland as one of the foremost contemporary authors,” the citation said.”

Check out one of his titles from McCain Library: 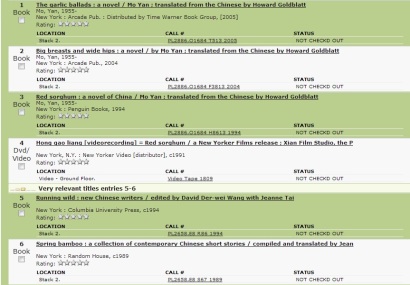